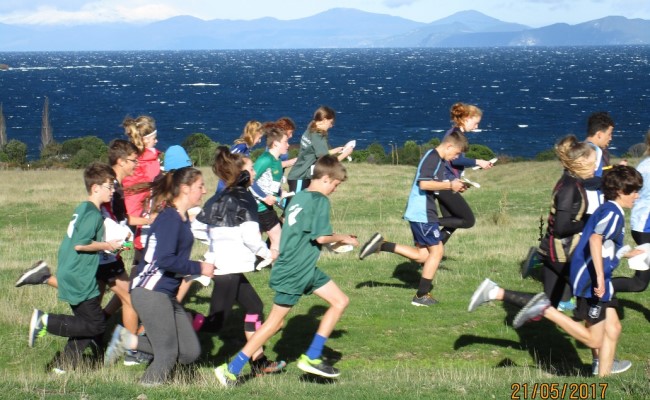 All event information, start draw and results
will be available on this website

The Entry Form must be filled in and returned
The Eligibility Form must be copied and signed by Principal or Sports Co-ordinator and returned
Please make organisers aware about any medical problems or special requests on a separate sheet
Entry Form, Eligibility Form and Special Requests must be emailed to the organiser entries@taupoorienteering.nz

$10 per student (includes hire of SportIdent)

A student eligible to compete in this secondary school event must:

Prizegiving will be held at the completion of the event.

The competitors are divided into Grades based on their gender (Boys and Girls) and current level at school.

The practice of competitors ‘running up’ a grade is not endorsed by Orienteering NZ, however it is recognised that in some cases this may be the best approach for a small number of top competitors with significant past experience. It is recommended that only those who have a chance of obtaining a podium place in the grade above consider running up.

Appendix 1 describes the Definition of Grades and Difficulty Colours

Appendix 1 - What do those colours mean?

Courses follow linear features drawn on the map. These are such things as tracks, roads, fences, and streams (these are called handrails). A control site is located at every decision point (for example, a turning point, or a change in the type of linear feature - e.g. from following a track to following a stream). All control markers will be visible from the approach side. Where a course has to deviate from the handrail feature (for example, to cross a forest block), the route will be marked all the way until a new handrail feature is reached. The start triangle will be on a linear feature. In forested areas, if no such feature is available, then there will be a taped route all the way from the start triangle to a linear feature (that is, the first control). Compass, if used, is limited to map orientation only. No route choice is offered. Doglegs are permitted.

Yellow courses are designed to give you limited route choice and limited compass use for rough direction only. Control sites will be on or near (less than 50m) drawn linear man-made or water features, and not at turning points. This gives you the opportunity to follow handrails or to cut across country. Control sites will be visible from the approach side by any reasonable route.

This course will have route choice with BIG attack points near the control sites and/or catching features less than 100m behind. Control sites can be fairly small point features and the control markers need not necessarily be visible from the attack point. Exit from the control should not be the same as the entry (no doglegs permitted). Simple navigation by contours and rough compass with limited pace counting required. Use of a chain of prominent features as "stepping stones" to complete a leg is permitted.

Navigation will be as difficult as possible with small contour and point features as preferred control sites (no obvious attack points, no handrails etc). Control sites will be placed in areas rich in detail, and before, and not close to, a large catching feature. Route choice will be an important element in most legs. No doglegs permitted.